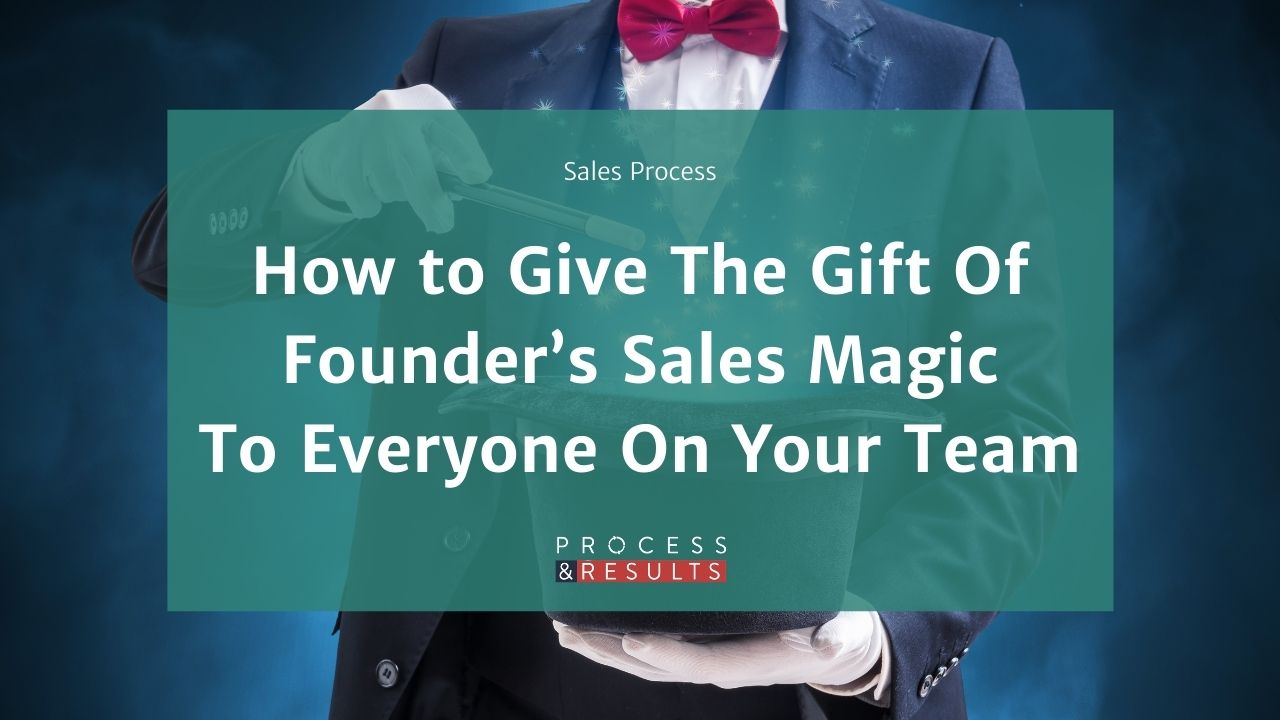 Company founders sell better than other team members.  This has been the case since long before Steve Jobs got on stage to show us “one more thing.” Need proof? People want to “deal with the owner (founder)” whenever possible. It is the “VIP” treatment.

We want to believe in heroes, and someone who founded a company has been lionized as a hero in movies, books and television.

If the company president is dealing with us, we must be extraordinarily important!

This is the essence of Founder’s Magic.

Founder’s Magic is so potent that when Elizabeth Holmes pushed Theranos, people bought in even when there was nothing to sell.  (There are documentaries and everything around this whole deal.)

Why Does Founder’s Magic Work?

Those advantages all stack to a combination that’s pretty hard to beat.   Founder’s Magic is a giant advantage where even a founder that’s not skilled at sales can often out-sell their best hires.

The Issue With Relying On Founder’s Magic

There are a few issues with relying on Founder’s Magic to close deals:

How To Give Your Entire Team a Little Founder’s Magic

So we want our team to sell like a founder without bringing in the founders to babysit every deal. That’s reasonable.

There are three things needed to make this happen:

#1. Have Rules Of Engagement

Founders should only handle the biggest and most important deals.  Build out rules of engagement in advance so the entire team knows which deals qualify.

With a few simple rules (deal size, amount of involvement), you will bring the founders in only when necessary.

#2. Give Your People Freedom To Cut Red Tape (And Wisdom To Know When To Say No)

Every time the founder gets involved, we should try to make decisions based on general rules. If exceptions are made during a deal, founders should report to the team:

This way the team gets to understand the thought process behind why a deal is good or bad.

An example would be this:

“Well, we talked to SMI, and Bob Sugar wanted to make sure our ads could start in 14 days rather than 21.  We made that work because we can shift some things round, and he agreed to get us everything we need within 2 days of payment.  Had he wanted us to do it in 10 days,  it would have been too tough.”

This will help all of your founders transfer the “why” behind when a deal works or doesn’t work.

#3: Have an onboarding process that feels like a party.

It’s fun to invite people to a party.  Way more fun than setting something up.

So when we onboard our customers, it should feel like a party.

We’ll dig more into this soon, but the ideas here are:

1-4% of revenue is spent on celebrating them in a
memorable, unique and connected way.  You generally have billing and mailing addresses, so let’s make the most of this information.

Join our newsletter, and we'll send you a new business process every Monday.

We cover everything that service businesses need to improve.

Thanks for subscribing! Please check your email for further instructions.

Something went wrong. Please check your entries and try again.

Phil Gerbyshak knows sales. He’s a sales speaker, a sales executive, a sales expert, a sales leader mentor, a sales podcaster and a sales coach. Phil has written 5 books, more than 3000 articles, and has been quoted in the Wall Street Journal, Daily Globe and Mail, Financial Times, Investor's Business Daily, Inc. and many other publications, including earning 3 covers: Speaker Magazine, Marketing Media and Money, and Social Selling Made Easy. Recently he was recognized as one of 25 Sales Leaders to follow by Crunchbase. Phil is currently the chief revenue officer and partner at Process and Results, LLC where he and his team help tech agencies and SaaS businesses sell more. They specialize in sales and SalesOps so that teams can stay focused on what they do best.